about time for an update…

I was lucky enough to come across an old Brooks saddle, but it was in need of some love. The seat was extremely dry and stiff, to the point that there was pretty much no flex at all in the leather. After some online reading about leather restoration, I chose a fairly drastic approach.

First I ordered some Lexol Leather Conditioner. I prepared the saddle by cleaning it gently with a damp cloth. Next I put the seat upside down on a sheet of aluminum foil and shaped it roughly to the contour of the seat. This allows you to use less of the Lexol, but maximize the contact between the Lexol and leather. Then I just poured about half of the 200ml bottle into the foil. I found it was really useful to use an old paintbrush to spread the Lexol over all the curves of the leather.

Over the next 40 minutes I just let it soak and occasionally used the paintbrush to spread the pools of oil that had gathered. To finish I wiped off all the excess and let the seat sit. After a while, the shine of the oil disappears as the oil soaks in, and the surface of the leather becomes dull. Then just take a old cloth and buff the surface. The seat will be darker in color than before, and the internet says you should be careful to wear dark colored pants when you ride it for the next few weeks.

Also, don’t worry too much if the leather isn’t immediately more pliable after the soaking. This seat was much softer the day after. 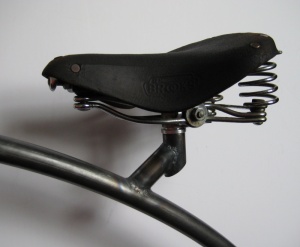 The seat post itself is just two short lengths of tubing welded together. A short aluminum tube fits in the vertical steel tube and is what the seat actually clamps to.

Next I made some simple foot pegs for the front wheel. I know these are readily available on the internet, and not even that expensive. But its pretty easy to make, too, so why not. The only tricky part was that I needed a long axle in the front wheel so that there would be some threads for the pegs to screw onto. Typical front axles are just long enough to fit in the front forks, so I used a rear axle instead. Unfortunately, rear axle threads are often larger (the one I had on hand is 3/8″-26), so it took a bit of digging to find the right sized cones. I’m sure someone has a nice chart of what kind of cones can be used with what kind of axles and hubs. I just grabbed whatever cones I could find and felt how well they turned.

Also, it 3/8″-26 is not common at all outside of bikes. So I ordered some taps online. The pegs themselves were made from some scrap tubing. In all, this method is really not much cheaper than just buying pegs. But now I have taps, so I can make them whenever I want. Yay, collecting tools! 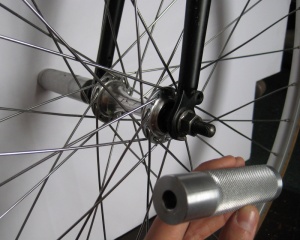 Picked up some lumber to do some planter boxes. While it’s true that this camper setup only takes a few minutes to take in and out of the car, it’s also great to have a utility vehicle WITHOUT having to move anything. A few minutes of vacuuming and we’ll be back to camper mode!
I finally finished editing the video for my #3dprinterenclosure build! It’s for my #artillerygenius printer and made mostly from #lasercut parts. (There will be free download of CAD files eventually, so please follow to stay tuned for updates). YouTube link in profile. Let me know what you think - is there something else I should also be upgrading?
Working on my #3dprinterenclosure made mostly of #lasercut parts, which will feature two of these slidey doors so I can access all the buttons easily. More details to come soon!
I finally posted the video for #machining this #honingjig. I look forward to #sharptools. Video link in my profile!
It’s that season again! After a few years of experimenting, this is still my favorite way to label plants. The laser engraving doesn’t fade in the sun like sharpie ink and I don’t fret about losing the popsicle sticks in the dirt because the just rot away anyway. The second photo shows my engraving ‘fixture’. I cut the outlines in the cardboard first. Then I use the same origin on the laser cutter when engraving. It goes by pretty quickly. Ya’ll planning to grow stuff this year?
I finished making my #honingjig (cutting the video now). I finally have some sharp tools, which is pretty nice! This is cutting maple.
Loading Comments...
Comment
×
<span>%d</span> bloggers like this: