In the past few months, I have been trying to learn how to skateboard by borrowing a friend’s skateboard. Recently he gave me a beautiful set of trucks, so I thought I better make a skateboard then.

My roommate had previously ordered a bunch of veneer for a project she never got around to, so she was nice enough to donate it to my cause. Because it had spent it’s last few years in a variety of humidities and temperatures, the surface was quite rough due to the expansion and contraction cycles of the fibers. So I started off by sanding all the sheets.

Next I ripped the sheets (a trickier operation than I expected on the table saw…) to slightly larger than my desired final width. Here you can see I have enough for 5 layers where the grain runs the length of the board, and two that run cross. The layering order is: length-length-cross-length-cross-length-length, for a total of 7 layers.

I decided to get kinda fancy with the bottom layer by making pin stripes using a different color of wood, mahogany in this case.

pin strips for the bottom layer

One of my biggest regrets on this project is how I went about the glueing process. But of course I also didn’t take very many photos (fingers covered in glue and all), so you’ll have to wade through all this laborious text just to extract my few valuable insights.

The first miscalculation was on how much the veneers would warp when I added glue, especially since I did one side at a time. I’m not sure if would have been much better if I had used veneers that hadn’t been sitting in a dry garage for so long. Either way, next time, I’ll start by wiping or spraying down both sides with water, something I can do faster than spreading glue evenly.

The second big mistake was using an old bottle of glue that had dried out a little, and then not using enough. The result was dry spots before I could even get the layers clamped down. The obvious fix here is to use generous amounts of regularly hydrated glue, but I think the pre-wetting would have helped here, too.

Finally, I could have put some better thought into my clamping fixture. Part of me really wanted this thrown-together vacuum bag setup to work (see taped down plastic film connected to shop vac in the photo below…), but the film was too thin. In the end, regular ole’ clamps and gravity (I read a bunch of emails while sitting on the white plastic) worked just fine.

Oh yea, and don’t forget to line the glue fixture with some old plastic bags to prevent your work from sticking to it.

clamped in the gluing form

After the top 6 layers were dried, I glued on the bottom pin stripe layer separately, then clamped it in the same form.

gluing on the pin strip layer

fresh out of the gluing mold

I made up a shape for the board, traced my half-pattern it onto paper, cut the paper out, and traced the pattern on both sides of the board.

cutting out the outline, leaving some extra material along the edge to be sanded off later

After cutting out the outline, evidence of my poor gluing practice was self-evident. I spent the next morning carefully prying the dry spots apart with a razor blade and shoving in as much glue as I could into the crack using another razor blade, then clamping the edge closed. I’m sure there are dry spots that I can’t fix in the center of the board, but I figure getting a well-glued edge solves most of the problem.

sanding to the final outline

With the outline squarely sanded, next I wanted to put a crown on the edge. To make the crown uniform, I wanted to mark a line about 2 mm from the edge of the board. I don’t have a marking gauge, but with a pencil (where I whittled some flat spots), a scrap of plastic, and a clamp, I don’t need one.

In the photo below, especially by the tail, you can see how the edge is crowned. 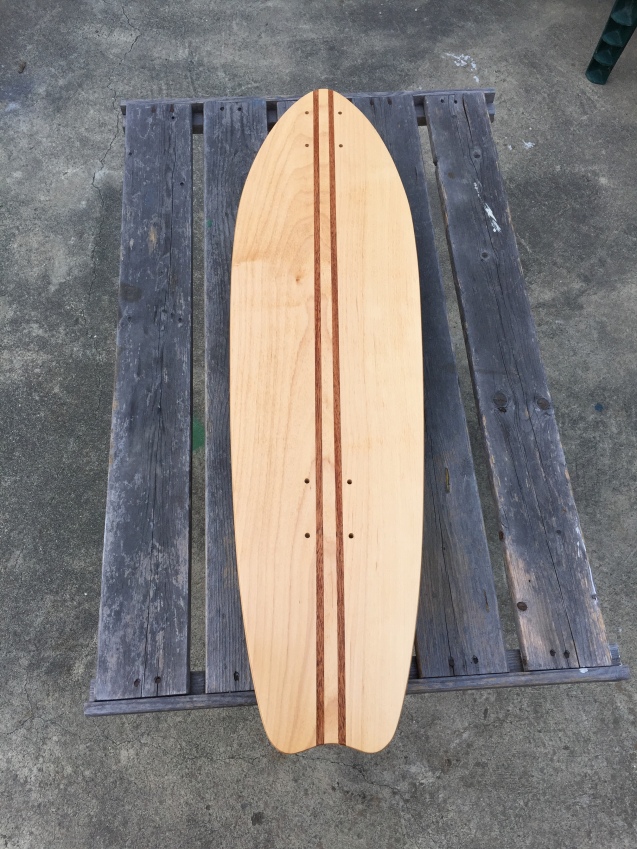 Now for the grip tape. Since I am a packrat who never throws potential project materials (I can usually stretch this definition to include everything) away, I had a fairly large piece of grip tape to use for this project. Unfortunately, it was not big enough to cover the whole board. In fact, the last time I used a piece of this grip tape, I was working on a hang board. Had I known I would make a skateboard in the future, I might have been smarter about how I cut the tape…

So instead I thought to create a clever pattern for the grip tape, and hoped to tile the shapes intelligently to make use of my weird scrap of grip tape. I love mountains a lot a lot a lot, so, there ya go. I drew the pattern on a piece of paper, cut the pieces out, and then tried various ways of arranging them. 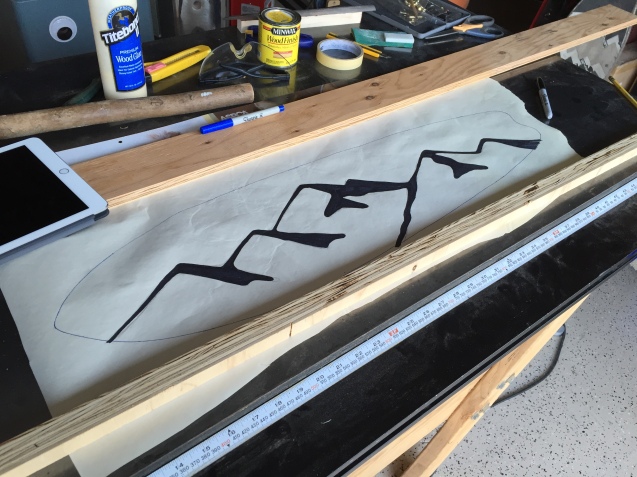 rubbing down the edges to prepare for trimming

In hindsight I wish I had done a better job covering the rear bolt holes. Aspirations for next time…

grip tape all trimmed, deck is ready for trucks

Make sure to turn the nut, not the bolt, when fastening the trucks. This will allow you to simply pull the bolts into the grip tape, rather than allowing the screws to turn the tape and potentially tear it around the screw head. 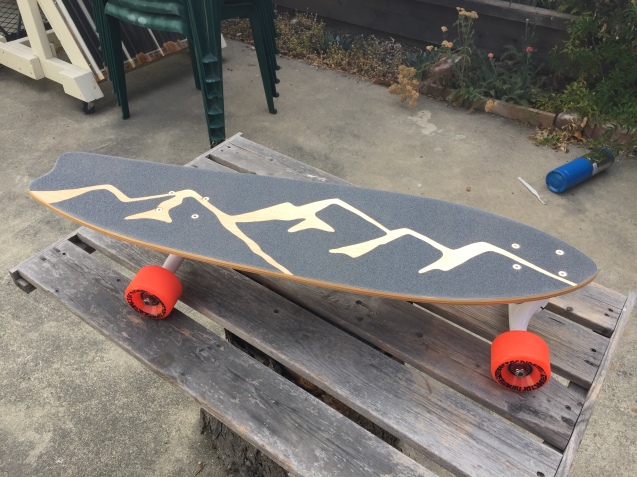 a view from the nose

don’t you want to give it a belly rub

In hindsight I think I made the tail too long, but I can learn to live with that. Now I just have to learn how to ride it!