This is a long overdue (as usual) update to the travel ukulele I made a year and a half ago.

I was finding that the mandrel that the strings wrapped around before heading to the tuners was creating way too much friction to actually let the strings tune properly. I was having to turn the tuner, then wiggle the string to get it to stretch past the mandrel. I’d been thinking for a while of using ball bearings instead. So step 1 was to cut off the old mandrel.

bye-bye old mandrel with too much friction

I designed a little aluminum block to hold all the bearings at the right spacing and started to machine it out.

facing off the bottom flange

Below is the final assembly. The radii are all sanded by hand on a little belt sander. People always ask if its CNC, but I think people forget how effective sanders and files used to be (and still are). The grooved bearings are really great for centering the strings. Also, they are widely available for just a few bucks for a set of 10x on sites like eBay thanks to the DIY 3D printer craze we are in. The set screw on the center knuckle holds the axle pin in place. 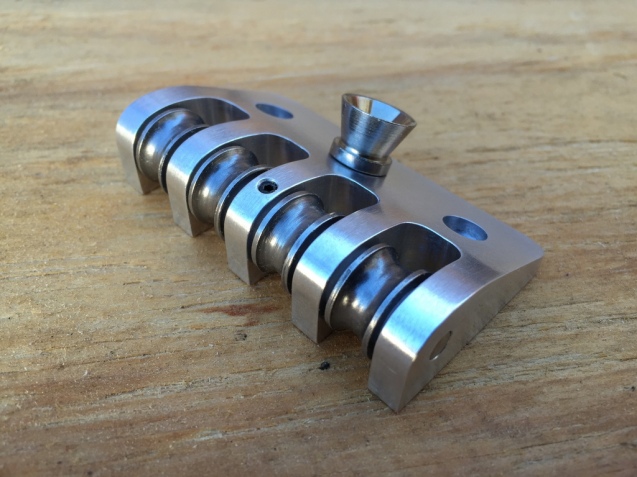 While I was in the upgrading spirit, I decided to make a real bridge, too. I still had some leftover lamb bone from a friend’s dinner (it has provided nuts and bridges for 3 ukes already). 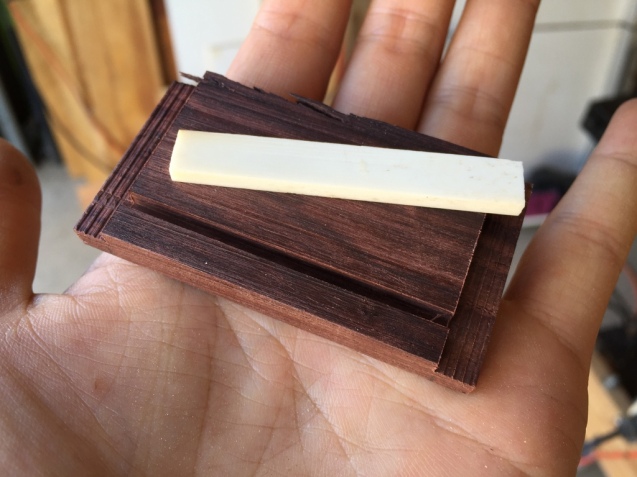 soon to be bridge

Below is the final shape. Again, there’s basically no need for compensation, in fact its probably detrimental on such a sort scale length. I can’t really justify why I did it. It does make for a cool shape I guess.

Here’s the shot with all the changes in place. It is phenomenally easier to tune. I’ve seen some folks use metal tubes or rollers for the strings to wrap around, and both those are probably a lot better than the wooden mandrel I originally made. But bearings seems like the best option overall and isn’t a huge step up in complexity to make.

I’d also been carrying this thing around in a cardboard box with some foam for a while. It worked well, but was bulky, so I decided to make a smaller hard case for it, too. I didn’t really document the process because it was so quick and dirty. Blocks are just sort of glued in where they are needed. I made both the body and lid as one piece and then cut them apart on the table saw. I use two velcro tabs to keep it closed.